Hank Cleaves first joined the Boston Junior Whalers as a skilled forward on our 2003 Elite Team when he was a Squirt Major, and has a member of our program all the way up through his Midget hockey years.

Hank grew up playing for the Mid-Fairfield Jr. Rangers youth program, where he rose through the ranks and matriculated on to play at the prep level at The Brunswick School.  As the Senior Captain for the 2021-2022, Hank paced Brunswick's offense attributing 17 goals & 22 assists for a total of 39 points.  This season, Hank took his talents to Western Canada where he currently plays for the Vernon Vipers in the British Columbia Hockey League, where he has tallied 3 goals and 7 assists for 10 points in first 15 BCHL games. 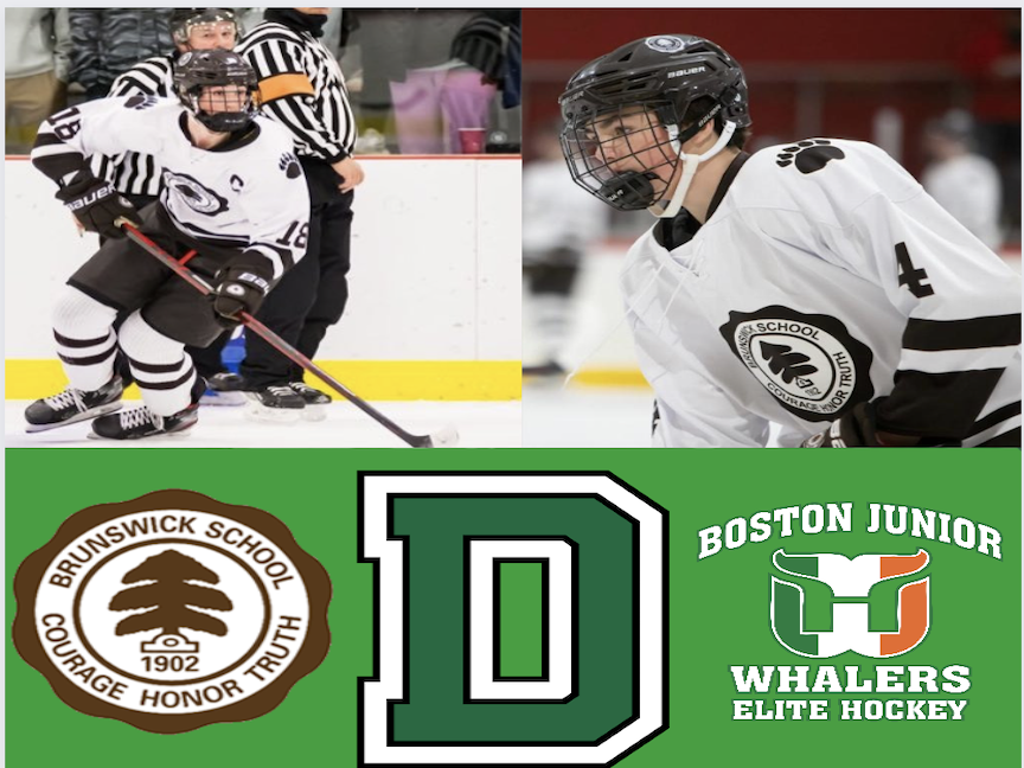 Hank (left) & Cooper (right) in uniform with the Brunswick School.

Cooper Cleaves, a poised and skilled defenseman, first suited up with the Boston Junior Whalers as an anchor on our 2006 Elite Team as the anchor of the team's blue line.  Cooper, like his brother, grew up playing club hockey for the Mid-Fairfield Jr. Rangers where he was a staple of the annually-ranked Top 10 team.

Cooper completed his freshman season in 2021-2022 as a member of the Brunswick School's defense, where he tallied 2 goals and added an assist, as an every day contributor to this team's star-studded lineup.  Committed to Dartmouth for the Fall of 2026, he is projected to fine-tool his game through the prep school route before matriculating on the The Ivy League.

"This is a special pair of commitments," said Mike Cusack, who has coached both boys throughout the years.  "It's certainly no surprise that Hank and Cooper will be taking their talents to a top-level school, as it is a direct reflection on their collective intelligence and hockey sense on the ice", he continued.

What makes this family-duo's college commitments so special, is that they are the eldest two of four Cleaves family star hockey players.  Chloe, a tenacious 2007-born defender, has been a key member of our Boston Lady Whalers program for the past several years.  Additionally, the youngest of four - Colton, has been a leader of our 2009 Elite Team since he was an incoming mite minor.

"The Cleaves family is very special to our program, and we could not be more excited for them. Dartmouth College is getting a pair of leaders on the ice, and exceptional young men off of the ice", Cusack said.

The Boston Junior Whalers Elite Hockey Club extends our sincerest congratulations to the Cleaves family, and to Hank & Cooper as they further their hockey futures at the NCAA Division I level.  Go Big Green!